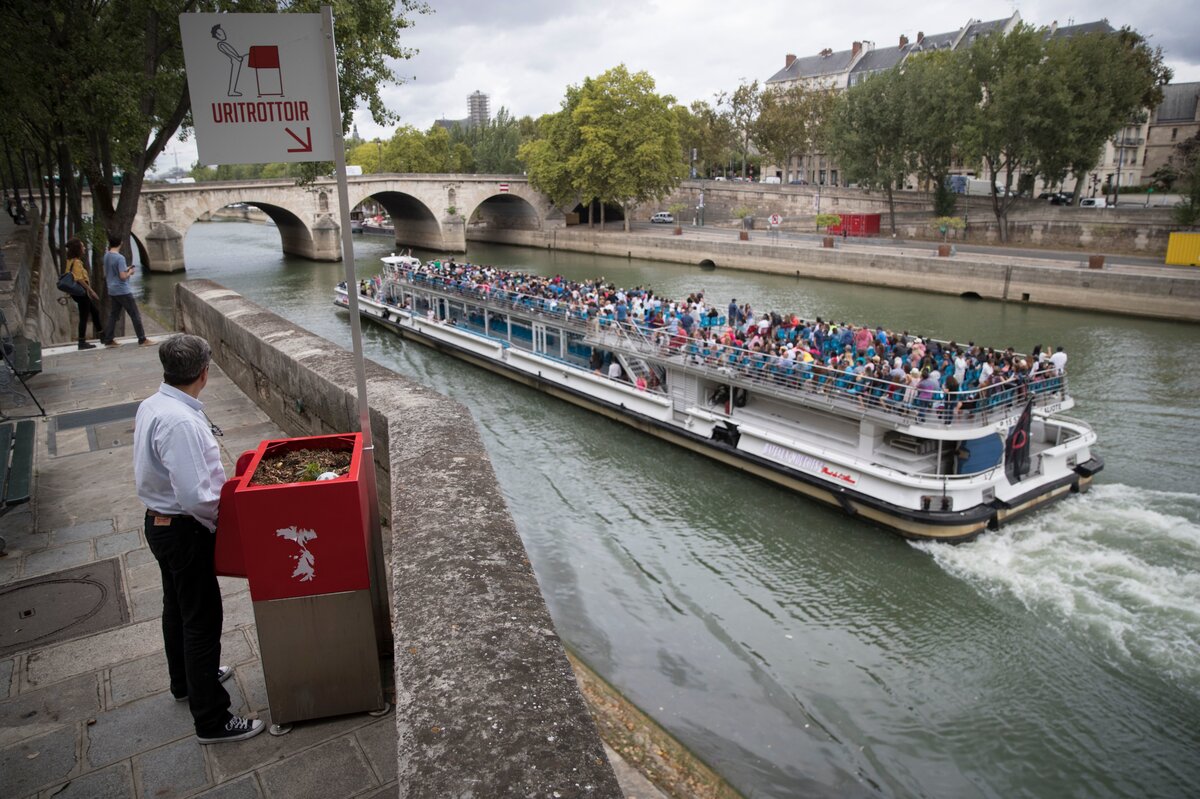 A man stands at a Uritrottoir public urinal on the Île Saint-Louis in Paris.
Thomas Samson/AFP/Getty Images

In Paris, authorities are taking an unusual approach to combat the scourge of public urination: Make urination even more public.

The city is experimenting with completely exposed, eco-friendly urinals.

The devices are called “Uritrottoir,” which combines the words for urinal and pavement. They’re not at all subtle. They’re bright red and in heavily trafficked areas — for example, directly next to the Seine near the Notre Dame Cathedral.

And if there’s any confusion, a large white and red sign with a red arrow and a cartoon of a man peeing probably clears it up.

French authorities say they are using this “surprising solution” to try to supplement existing toilets in heavily congested areas where there are urine issues. “The interest of this new urban fixture lies in its mobility, ease of installation and use, as well as its ecological dimension,” city authorities said in a statement.

They introduced three of these toilets in March and added a fourth in July. They’re planning to install a fifth urinal soon.

The new additions have appalled some residents, such as Paola Pellizzari, who owns a Venetian art store. “There’s no need to put something so immodest and ugly in such an historic spot,” she tells Reuters.

Some others view the urinals as straightforwardly sexist.

“They have been installed on a sexist proposition: men cannot control themselves (from the bladder point of view) and so all of society has to adapt,” Gwendoline Coipeault of the feminist group Femmes Solidaires tells the news service. “The public space must be transformed to cause them minimum discomfort.”

The designers advertise their product as “the urban ecological solution for civilizing ‘wild peeing.’ “

Men pee into the receptacle, which is filled with straw and other composting materials to keep odors down. That material eventually becomes compost that can be used to fertilize plants. On top of the Uritrottoir is a small flower garden to “beautify your public spaces.” City authorities even said this could reduce the amount of chemical fertilizer used.

This isn’t the first time Paris has tried to tackle the “wild peeing” problem, according to The Guardian:

“In its effort to stem the flow, Paris has installed some 400 self-contained, self-cleaning, unisex public toilets known as Sanisettes, free to use since 2006. It also employs a small army of street sanitation workers who disinfect and deodorise thousands of square metres of walls and pavements every month.”

Laurent Lebot, a designer of the Uritrottoir, tells the newspaper that the device isn’t a complete fix to the problem.

Still, “drunk blokes just keep pissing,” he said. “People may laugh at our solution, but it could just work.”