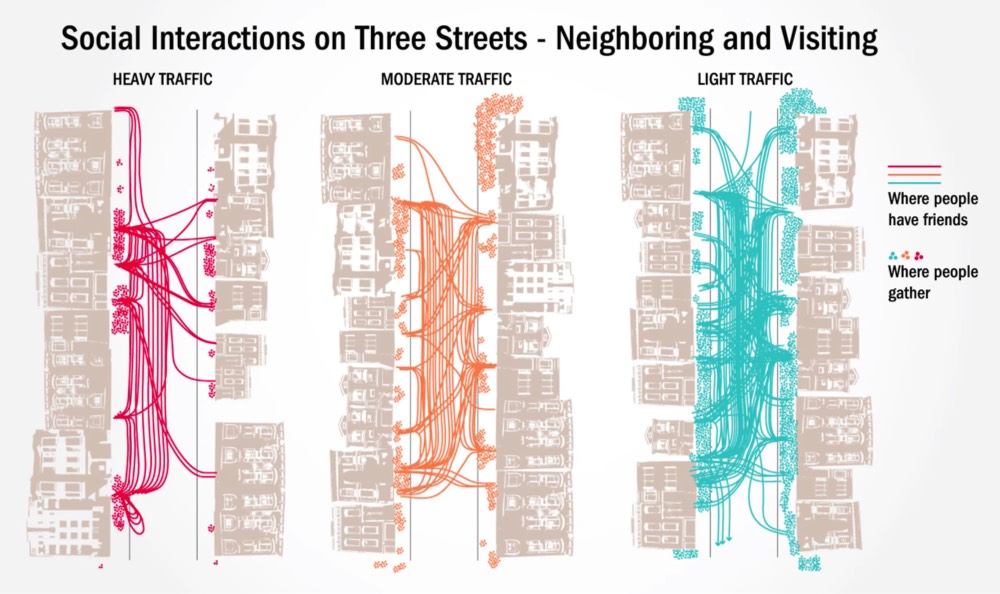 In 1981, a Berkeley urban design professor named Donald Appleyard published a book called Livable Streets (now out of print). In it, he described the results of research he’d done in the late 1960s about the effects of car traffic on the people who live in cities. For the study, he selected three similar residential streets in San Francisco that only differed in the amount of street traffic and then measured how the residents used their streets.

To illustrate his findings, Appleyard used these simple and revealing maps of the data he collected. The first map shows gathering spots on the streets and the friendships made amongst neighbors:

The second map shows what residents considered their “home territory” on their street:

What Appleyard found was that the amount of car traffic on the street dictated how friendly neighbors were with each other, how “at home” people felt in their neighborhood, and how familiar they were with their surroundings.

In the late 1960s Appleyard conducted a renowned study on livable streets, comparing three residential streets in San Francisco which on the surface did not differ on much else but their levels of traffic. The 2,000 vehicles per day street was considered Light Street, 8,000 traveled on Medium Street and 16,000 vehicles passing down Heavy Street. His research showed that residents of Light Street had three more friends and twice as many acquaintances as the people on Heavy Street.

Further, as traffic volume increases, the space people considered to be their territory shrank. Appleyard suggested that these results were related, indicating that residents on Heavy Street had less friends and acquaintances precisely because there was less home territory (exchange space) in which to interact socially.

Light Street was a closely knit community. Front steps were used for sitting and chatting, sidewalks for children to play and for adults to stand and pass the time of day, especially around the corner store, and the roadway for children and teenagers to play more active games like football. Moreover, the street was seen as a whole and no part was out of bounds.

Heavy Street, on the other hand, had little or no sidewalk activity and was used solely as a corridor between the sanctuary of individual homes and the outside world. Residents kept very much to themselves, and there was virtually no feeling of community. The difference in the perceptions and experience of children and the elderly across the two streets was especially striking.

Cars separate people from each other and so does traffic. As @wrathofgnon put it:

This was in 1969, and here we are today in 2018 still building these terrible anti-human suburbs and cities. There is no progress, and there certainly is no science, when we ignore basic common sense and even the studies that prove it.

In 1973, just a few years after Appleyard conducted his research, George Lucas’s ode to American car culture, American Graffiti, came out. Even with the gas and oil shortages in the 1970s, the sense of freedom, rebellion, and individualism depicted in American Graffiti and similar films like The French Connection, Bullitt, Smokey and the Bandit, and Cannonball Run won out over Appleyard’s attempts to show how cars wrecked the social fabric of cities. It was no contest…Americans love cars.

In a sad twist of fate, Appleyard died relatively young at 54 — he was struck and killed by a speeding car in Athens, Greece in 1982.