You have to keep your eyes peeled for the bus at the station in Shenzhen’s Futian central business district these days. The diesel behemoths that once signalled their arrival with a piercing hiss, a rattle of engine and a plume of fumes are no more, replaced with the world’s first and largest 100% electric bus fleet.

Shenzhen now has 16,000 electric buses in total and is noticeably quieter for it. “We find that the buses are so quiet that people might not hear them coming,” says Joseph Ma, deputy general manager at Shenzhen Bus Group, the largest of the three main bus companies in the city. “In fact, we’ve received requests to add some artificial noise to the buses so that people can hear them. We’re considering it.”

The benefits from the switch from diesel buses to electric are not confined to less noise pollution: this fast-growing megacity of 12 million – which was a fishing village until designatedChina’s first “special economic zone” in the 1980s – is also expected to achieve an estimated reduction in CO2 emissions of 48% and cuts in pollutants such as nitrogen oxides, non-methane hydrocarbons and particulate matter. Shenzhen Bus Group estimates it has been able to conserve 160,000 tonnes of coal per year and reduce annual CO2 emissions by 440,000 tonnes. Its fuel bill has halved.

“With diesel buses I can remember standing at the bus stop and the heat, noise and emissions they generated made it unbearable in the summer,” says Ma. “The electric buses have made a tremendous difference.”

China’s drive to reduce the choking smog that envelops many of its major cities has propelled a huge investment in electric transport. Although it remains expensive for cities to introduce electric buses – one bus costs around 1.8 million yuan (£208,000) – Shenzhen was able to go all-electric thanks to generous subsidies from both central and local government. 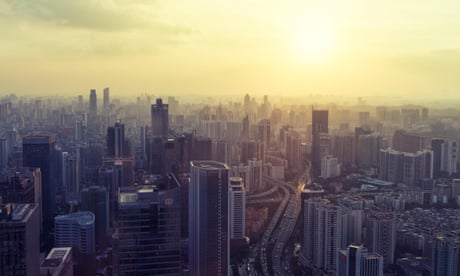 Shenzhen – from rural village to the world’s largest megalopolis

“Typically, more than half of the cost of the bus is subsidised by government,” says Ma. “In terms of operation there is another subsidy: if we run our buses for a distance of more than 60,000km we receive just under 500,000 yuan [£58,000] from local government.” This subsidy is put towards reducing the cost of the bus fares: “The government looks at the public transport very much as social welfare.”

To keep Shenzhen’s electric vehicle fleet running, the city has built around 40,000 charging piles. Shenzhen Bus Company has 180 depots with their own charging facilities installed. One of its major depots in Futian can accommodate around 20 buses at the same time. “Most of the buses we charge overnight for two hours and then they can run their entire service, as the range of the bus is 200km per charge,” says Ma.

Availability of charging stations is a major factor in why it is it difficult for other cities around the world to switch to all-electric bus fleets, but Chinabeing a one-party state hasn’t necessarily made it any easier in Shenzhen. “We have some of our own depots, but we also have to rent some from the municipal government, as well as from the private sector,” says Ma. “Aside from the subsidies in terms of purchasing the buses, we are very much left to ourselves to how we look for resources for our charging infrastructure.”