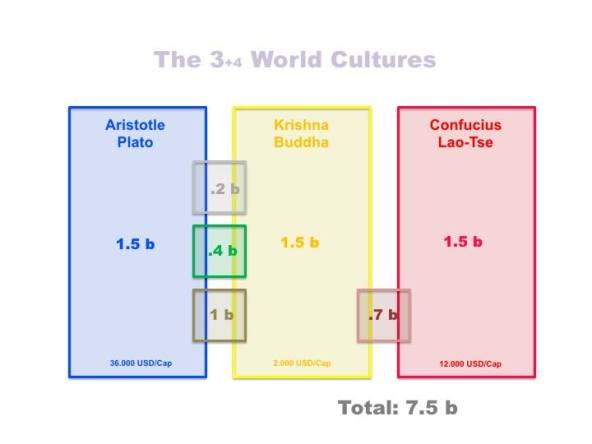 By Pedro B. Ortiz
I would like to share with you what I think is the role of India in the world next Century. I attach two slides I would like you to comment on what do you think of them…
1) Six main cultures, but which are going to be the main ones in the 22nd Century?
2) Empiricist: Aristotle, Krishna, and Confucius. Idealist: Plato, Buddha, and Lao-Tse. But the difference is 36.000, 12.000 and 2.000 USD GDP per Capita. Why?

Empiricists: Aristotle, Krishna and Confucius
Idealists: Plato, Buddha and Lao-Tse
Six main cultures, but which are going to be the main ones in the 22nd Century?

Shadi Aein
I think what we will be faced in 22 century is completely different from culture, ideology and religion exclusively related to a country . It is not the matter of population or domination of powers. As after 18 and enlightenment state of god and religion changed, in 22 century we face a combination which tries to take distance from culture too. It has many reasons such as technology and immigeation and of course promotion of knowledge among human.
By globalization, other issues will rise. Economy is one of them and as china is taking global bazar, maybe it can has more effect but still I think it is not about culture or ideology.

Pedro B. Ortiz
Shadi, I think there are profound cultural differences that are difficult to overcome. Chinese culture puts the group interests over the individual. Western Culture thinks that the Gorpu evolution is made by the individual input. Chinese think the future is already written (Tao-Te-Ching). Western culture thinks we build the future with the actions of each day. This antagonistic dichotomy is difficult to overcome, if not impossible.
Indian Culture is in between. Closer to the Western one. But let me talk about Persia instead.
Western Culture is both influenced by the India n Culture and the Persian one. Jesus had a Buddhist influence. But Christianity, as is known by the Roman Catholic Church, is made up by Saint Paul and not Jesus. And Saint Paul was from Tarsus, at the end of the silk road and had a huge influence of Zoroaster and Mitra’s adaptation. That division is not only within Christianity (As Shias and Sunnis in Islam) but as well in the social structures of Tribal/Germanic Europe (Empiricists) and Latin Europe (Neo-Platonic). My point is that Persia and India are at the core of Western Civilization, but we have found a common agreement on the preponderance of the Individual over the group. We might be different in that.

Amruta Ponkshe
Interesting discussion so far, Pedro and Shadi. Great observations about Indian and Persian influences on western civilization.
Would there be a class/ creed in the near future of people believing in ‘machinism’? The acceptance that machines (and their algorithms/ outputs) aimed at humankind are the law? Let me explain. There are several of our social media consumption outcomes right now that are decided by algorithms. Right now (I’d like to think that) we still have some ‘agency’ or control over the inputs that we give these algorithms and hence can, to a certain extent, confound or influence their outputs. What happens when we start believing that ‘what the algorithm says about me is the TRUTH and I do not need to go look beyond this Truth.’ That gives rise to a class of people I’d like to call the machinists. Of course this is probably still way into the future, but the future machinists will probably not be ruled by our current denominations of ethnicity, religion or culture.

Pedro B. Ortiz
Amruta. You are pointing at the difference between smartness (machinist protocols) and intelligence (creative cross-connections). Machinism produces GDP (that is the heritage of the USA to world culture) but creaticity produces the unforeseen future.
My point, see the second graph, is that in the 22nd. C. There will essentially be 3 Cultures: Chinese, Indian and Western. Persian is too small. Arab has always been a trasitional culture. (The later one and taking from everyone else) and the Animist is in trouble if they are not able to overcome the tribal disagregation. How the 3 main world cultures will build up a dialogue between antagonist value systems is my concern.

Shadi Aein
Professor it is vividly clear that these culture had undereffected other cultures in the pas but what has remained from them to effect the future? Persian culture has lost its power after arrival of islam. As far as we don’t have perecise information about it and what is in Iran today is different from persian culture. How many of Iranian people have Mitra, Zaroaster or Bahaei religion? How much they know about history of Persia? In our educational system our new generation read arabic language and know nothing about history of persia and its languages and religions. In Europe after medival and enligtenment, after Cogito ergo sum how much of previous culture has remain? Do you think after these terrorist attacks islam has power in future? After some happening future becomes diferent like european union after second world war and building organizations like human right organization . Maybe my opinion is closer to western one. Our future is our today’s actions.

Adil Abdalla
This is my views and predictions for the 22nd century; mainly:
1. Cost of urban regeneration and reform the system at the Western
2. Disruption and reform corruption at Indian Subcontinent
3. Secular and urban growth at Persia and Arabia
4. Chaotic populism and unrest in Africa