It is only 60 square feet of indoor living space. “It’s just really warm and awesome and amazing,” said Joscelyn. The main thing is it gets her off the streets and into a secure spot. “When you have a place to keep your possessions dry and safe instead of hauling them around, then you can start stabilizing your life and figuring out what the next step is.”

The huts look similar to a Conestoga Wagon, the precursor to the Prairie Schooner covered wagons that helped bring settlers west.

“I designed the Conestoga Hut,” said Erik de Buhr of the group Community Supported Shelters in Eugene. He is the driving force behind this effort, which is supported by donations. 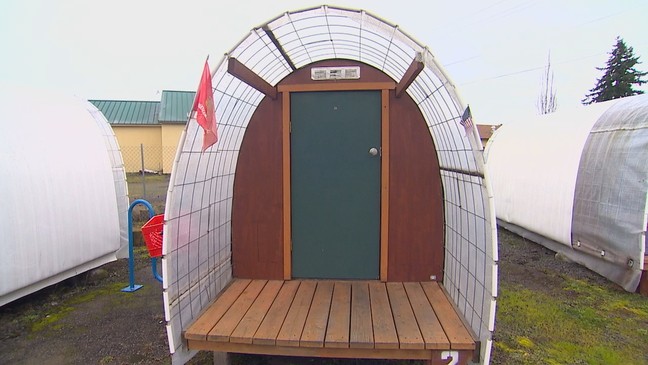 And they take only a few hours to assembly rather than weeks for tiny homes. “Oh it’s a great idea.” said David Quale. “It’s very transitional.” He leads a group of volunteers from the Eugene community in putting the finishing touches on their 84th Conestoga Hut.

“They are weather proof,” he said. “They’re insulated. They’re lockable which is really important because a lot of people on the street lose their stuff.”

“I would say this place pretty much saved my life,” said James Clapp. He lives at the Conestoga Hut village designed especially for veterans. “Where I’m going to go from here? I’m looking for new employment opportunities.”

Eugene is one of only two Northwest cities to embrace the idea of dealing with homelessness in this fashion. The city council voted for an overnight camping ordinance that allows people to sleep in vehicles, tents or Conestoga Huts. They are allowed a maximum 20 huts on parking lots, six huts at churches and one hut at a private home.

“They look nice and they look orderly and I think the people in this community appreciate the look of it as well,” said Regan Watjus of the Eugene City Manager’s office.

“It was fantastic,” said Jeff Howard. “It gave me a stable place to operate from.” Howard said the program works. He has gone from a Conestoga Hut to his own apartment with a future. “Who knows. Hopefully brighter things. Just having a safe secure place is amazing. It’s life changing.” 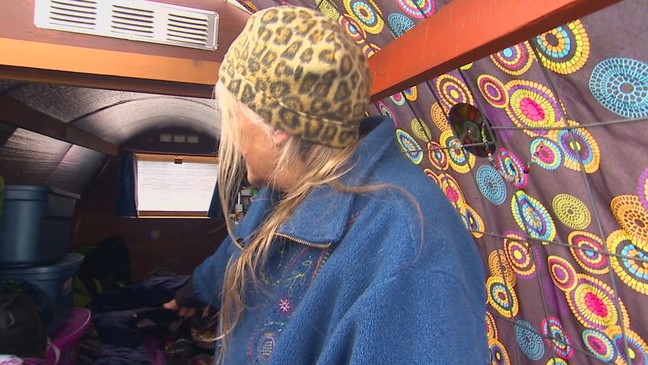 “I think it’s headed as a Pacific Northwest regional approach to temporary shelter,” said de Buhr. He said it is a new take on an old look and one more option to help get people off the streets and into permanent housing.

Walla Walla is the other city in the Northwest with Conestoga Huts. Aberdeen is looking at them. Tacoma and Olympia have decided to stay with the focus on tiny homes.