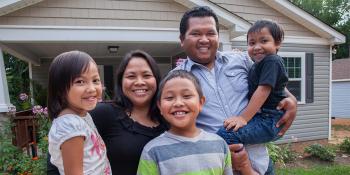 Families across the United States are paying too high a price to cover the cost of home. Rents and homeownership costs are skyrocketing while wages are not keeping pace.

Today, nearly 19 million U.S. households pay half or more of their income on a place to live. That means nearly 1 in 6 families are denied the personal and economic stability that safe, decent and affordable housing provides.

At the most basic level, what makes a home affordable comes down to simple math. Subtract your monthly rent or mortgage from your take-home pay, and you should have enough money left over for life’s necessities.

Too few people are having that experience, the result of two major trends — one having to do with lagging incomes for low- and moderate-income families, the other with the soaring cost of housing, says Chris Herbert, managing director of Harvard University’s Joint Center for Housing Studies. “You look at this and say, ‘Is it a housing problem, or is it an income problem?’ I would say it is both.”

On the income front, today’s real average wage — that is, the wage after accounting for inflation — has about the same purchasing power it did 40 years ago, according to Pew Research Center. Meanwhile, the Joint Center for Housing Studies notes that both the median home price and median rent has risen faster than overall inflation over the past 25 years — 41 percent and 20 percent respectively.

Experts generally say that the maximum a family should pay for housing is 30 percent of their income. Any more than 30 percent, and a family is considered cost-burdened, which means they often find themselves making tough choices when it comes to other needs.

Ebony understands those impossible choices. The U.S. Army veteran and mother of three used to be riddled with anxiety because her rent commanded almost all of her monthly income from her job as a collections agent at a bank.

Because Ebony had nothing left over for the utilities, car payment, health insurance and child care, she was forced to engage in a game of bill shuffling. “I would pay some bills one month, others the next,” she says. “I had to get creative with meals and went to three or four food banks.”

Her anxiety rubbed off on her children, 12-year-old Jaylen, 10-year-old Jaida and 8-year-old Jayce. “We barely made it through that time,” Ebony says. “To be completely honest, I still don’t know how we did it.”

After partnering with Habitat, her mortgage is 30 percent of her income. She can now pay her other bills on time and even has been able to put some money away. “Having a house that I can afford allows the chance of living the kind of life I always wanted for my kids. I feel like everyone should have the chance to feel the way that I feel.”

More families should know that feeling.

“Families should not have to live in fear of choosing between paying for a roof over their head or paying for food or medicine or clothing for their kids.”

“The scale of this problem is far too large for any one organization to address on its own,” says Adrienne Goolsby, Habitat for Humanity International’s vice president for U.S. and Canada. “We will continue to do our part in the communities across the United States where Habitat works, but we are also ready to help convene or join with other stakeholders at the local, state and national level to address the unrelenting crisis in housing affordability, across the housing continuum.”

As it stands now, far too many individuals and families with lower and moderate incomes can’t afford the rent or save for a house — and that has tremendous ripple effects.

“Families should not have to live in fear of choosing between paying for a roof over their head or paying for food or medicine or clothing for their kids,” says David M. Dworkin, president and CEO of the National Housing Conference, a Washington, D.C.-based nonprofit that advocates for people of all income levels to live in safe, decent affordable homes.“Affordable housing allows families and individuals to have the opportunity to be empowered to choose where they live. Where our children go to school and how much of our day is spent commuting are choices that should not be dictated by our economic circumstances.”

Through our Cost of Home campaign, we are mobilizing local organizations, partners, volunteers and community members across the country to find solutions and to help create policies that will allow 10 million individuals to have access to affordable homes.

Together, we can make the cost of home something we all can afford. Join us!