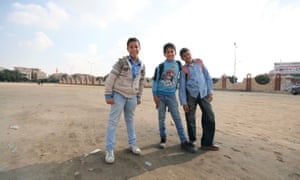 Four decades ago Egypt embarked on the most ambitious new cities building programme in the world. Their boom shows no sign of stopping

by Rachel Keeton and Michelle Provoost

Cities is supported by

Seen from space, Egypt is a vast dusty land with a green Y opening into the Mediterranean Sea – a fertile valley that makes up 5% of the country yet is home to 95% of the population.

This pattern of human occupation had characterised the country for thousands of years, but in the 1970s, as ever more precious green land was eaten up by urban growth, an idea that had been taking shape in the national consciousness for decades was finally put into policy. Egypt would “conquer the desert” and redistribute its burgeoning population across the white sands of the Sahara – an Egyptian version of the 19th-century US “manifest destiny” to move west, no matter how punishing the consequences.

With Cairo bursting at the seams, plans were drawn up for satellite cities to take the strain. After many failed attempts 10th of Ramadan – a blue-collar industrial city – was the first experimental new city to take shape in the 1970s. Later new cities such as Sheikh Zayed City turned away from these working-class roots to become gated communities for the privileged – high income cities in a low-income country.

For four decades the new cities programme has remained the only vehicle for Egypt’s urban development. Today there are 22 built or part-built Egyptian new cities – and the New Urban Communities Authority (NUCA) has plans for 19 more. Around 7 million people now call these new cities home. It is arguably the most ambitious new cities programme the world has ever seen – a dream of bustling cities in an almost lunar desert landscape that outstrips the visions of even China and India.

Named for the beginning of the Arab-Israeli war, the establishment of 10th of Ramadan to the north-east of Cairo was a populist move by an increasingly unpopular President Sadat, who sold it as a grand solution to tackle rampant unemployment, poverty and inflation with 100,000 jobs and half a million homes.

Driving there from Cairo today, the cosmopolitan density of downtown soon gives way to miles of mid-rise concrete and brick apartment buildings that look solid, but are notorious for collapsing. Blink and you miss the line where lush date palms and cotton plants become desert sand. An hour after leaving Cairo, you enter 10th of Ramadan

Although the masterplan – drawn up by Egyptian and Swedish engineering firms, and inspired by the modernist principles of Constantinos Doxiadis and the French villes nouvelles – depicts the city as a diamond in the desert, in reality the unfinished city appears to fade out from south to north. It is as though the desert were winning this 40-year struggle.

But things here change fast. Every year the half-built new city is filled with more sand-coloured apartment blocks and villas. Huge open spaces, currently home to wandering packs of dogs, are flagged for future development. According to NUCA, 650,000 residents live here. The target is 2.1 million by 2023.

Industries – plastics, paper, medical supplies and garment factories – are concentrated in a 10-mile strip along the southeastern edge of the diamond. Egyptian factory owners flocked here in the late 1970s when the government offered attractive incentives and many remain family-owned and operated. Some workers live in employer-provided houses and shared flats, or in dormitories within the factories themselves – but most low-level industrial employees are brought in daily by private buses from surrounding villages.

The first few years here were the hardest thing I’ve ever done. No friends, nobody to rely on but ourselves

It’s not a beautiful place. Housing is unapologetically bare, apart from the graffiti that covers many ground floor facades. Most public squares and playgrounds are dusty brown.

From an ecological standpoint desert cities have obvious challenges, and 10th of Ramadan is no exception. A railway (promised for 40 years) is under construction but at the moment the city is accessible only by car, private minibus or public bus. Notorious traffic jams clog the highway to Cairo. Meanwhile, an aquifer gives 10th of Ramadan independence from the Nile, but makes the city vulnerable to pollution. A 2012 study detected chemical inorganic, biological, organic and bacteriological pollutants in all 31 groundwater samples tested.

Still, the joy of public life is evident. Schoolchildren wander the streets and squares, stopping for a soda or kushari, a local street food. Women move in small groups, running errands collectively or gathering children from school. Residents know what cosmopolitan Cairenes think of 10th of Ramadan: that it is a blue-collar city without culture or finesse. But they tell you how much they appreciate the open space, the organisation, the quiet.

In the 1970s and 1980s, men came for jobs and brought their families. Life in a city built from scratch can be alienating and lonely. As one first-generation garage owner put it: “The first few years here were the hardest thing I’ve ever done. No friends, no big family, nobody to rely on but ourselves.” But today – even though it remains a struggle to attract new residents – there are second and third generations living here. Even though downtown Cairo is only an hour away, for the residents of 10th of Ramadan the capital may as well be on the other side of the Sahara. In this much, at least, the experimental new city was a success.

While 10th of Ramadan and Egypt’s other first generation new cities were industrial at heart, a restructuring from the World Bank and IMF in the 1990s brought a radical shift in policy.

The second generation of new cities – exemplified by the gated communities of Sheikh Zayed City – became enclaves for wealthy Cairenes eager to escape the chaos of the capital.

Although Sheikh Zayed City – 25 miles to the west of Cairo and named for the emir of Abu Dhabi who helped fund it in 1994 – was originally planned as a mixed-income city, it quickly transformed as NUCA discovered the profit-making potential of land sales to developers. Sheikh Zayed City became one of the first new cities to be filled with gated compounds, popular with the wealthy seeking security, status and privilege.

Luxury housing accommodates 71% of the city’s residents while low-income housing accounts for just 15%. There are golf courses, swimming pools and manmade lakes – which must be regularly refilled due to evaporation.

The result is division. Residents of gated compounds enjoy access to internal shops and clinics, as well as upscale shopping malls accessible only by car. Low income residents rely on limited public transport options to reach cheaper options in nearby satellite cities or in downtown Cairo. “Our demands are quite normal,” said one public housing resident at a recent protest. “Most of us are waiting for services such as shops, pharmacies and schools.”

Arriving from Cairo, the first impression of Sheikh Zayed is one of absence: no urban cacophony, no pedestrians. No one walks here – distances are far and walking would imply that one cannot afford a car. The differences between public and private space are striking. Driving around, the city feels most like a collection of inaccessible islands of gated compounds and luxury plazas rather than a coherent whole. Gated compounds present only a glimpse of greenery over the top of high-security fences, and armed guards at the entrances of shopping plazas turn away groups of street children, allowing access only to those who look like they belong in these semi-private spaces. Signs for international franchises such as Starbucks, Baskin-Robbins and Costa Coffee speak to world-class aspirations. Public housing areas, in contrast, exude an atmosphere of general neglect and roadsides are strewn with garbage.

You feel free. There’s no smell. Cairo smells like pigs

The majority of housing in Sheikh Zayed is too expensive for most Egyptians, and like 10th of Ramadan, it has struggled to attract new people. Its current population of 330,000 inhabitants is just under half its target.

The problem is exacerbated by private developers who build upmarket properties despite the lack of demand, and many villas lie derelict or unfinished. Layers of graffiti and live-in security guards suggest some have remained uninhabited for years.

Speak to many of those who do live here, though, especially those who can afford to live in gated compounds, and many contrast the place positively with Cairo. Cairo is “dirty, overcrowded, unsafe, polluted,” they say; Sheikh Zayed is “clean, quiet, well-organised and safe”.

One businesswoman in her mid-30s praised Sheikh Zayed City’s “decent malls” and “good supermarkets”. “You feel free,” she added. “There’s no smell. Cairo smells like pigs.” A marketing manager welcomed the lack of “shabby people”. Many were content with the lack of public transport, believing a metro connection to Cairo would attract “the wrong kind” of new resident.

These cities are far from full, but the new cities building boom shows no sign of stopping. What motivates Egypt to build more and more cities in the sand when there is such little public demand?

According to economist and urban planner David Sims the whole programme may be too big to fail. There are “too many cheerleaders for desert development, too many interests intertwined in this development, and too many client groups to satisfy”. The programme also gives the government something to splash across state media, claiming it has done its job by building new homes, and supplies luxury housing so Egypt’s upper classes can escape from downtown.

Last year the government announced an additional 20 new cities to house 30 million residents and be spread throughout Egypt. Among them is a new administrative capital, Wedian City, for 15 million people, to be built to the east of Cairo.

It is unclear whether this current generation of new cities will learn from the experiences of four decades of new cities construction, or continue the extreme levels of spatial segregation of Sheikh Zayed City.

What is certain, though, is that existing cities are being neglected. As Egypt continues to construct cities from scratch in the sand the aged urban areas of downtown Cairo and Alexandria have no large-scale renovation or upgrading plans. Egypt’s old cities are crumbling to dust.

This article is an edited extract from To Build a City in Africa: a History and a Manual by Rachel Keeton and Michelle Provoost, published by NAI010 and the International New Town Institute (INTI)