However; it is to place an order in presence of new technology and its associated risks.. Later, it became a necessity with increasing car traffic and populations

‘Jaywalking’ in the Melbourne CBD

It seems that every second month the Victoria Police decide to hold a jaywalking ‘blitz’ in the Melbourne CBD – in the 2011-12 financial year they issued 5690 fines to pedestrians. So what actual offence do the infringement notices have written on them? 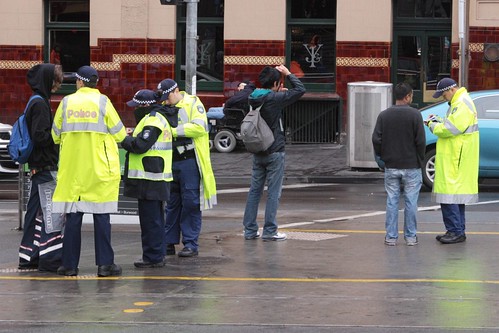 The VicRoads road rules for pedestrians page has the following to say:

Fines apply to pedestrians who commit the following offences:

While not crossing against the red man is obvious, the interesting offence is “cross the road within 20 metres of a pedestrian crossing” – this means you could just walk down the street a little bit from the traffic lights and wait for a gap in the traffic, and you’re home free. So how can you know you’re more than 20 metres from an intersection in the Melbourne CBD? Trams are your perfect measuring stick!

Melbourne’s single carriage trams are around 15 metres long (Z3 class are 16.64 metres to be exact) so you’ll need to add a few meters to find your legal crossing location.

The two carriage B2 class trams are 23.63 metres long, so if one is stopped at the traffic lights, the tail end is probably a legal crossing location.

As for the modern low floor trams, they are all far longer – the C2 class ‘Bumblebee’ trams are 32.52 metres from nose to to tail.

When you think about it, 20 metres isn’t very far in the Melbourne CBD!

I’m no lawyer, just a guy who knows where to find where our laws are published (the AustLII websiteis one).

In addition, while crossing more than 20 metres from a pedestrian crossing might be a legitimate option, common sense is still rIquired – you could get booked for “failing to use the shortest or most direct route across a road” or “causing a traffic hazard by moving into the path of a driver” – and as a tram passenger they could get you for “failing to cross to the nearest edge of the road after getting off a tram”.

I’m hoping the ‘pay attention to traffic and not blabber away on your phone’ bit should be obvious! 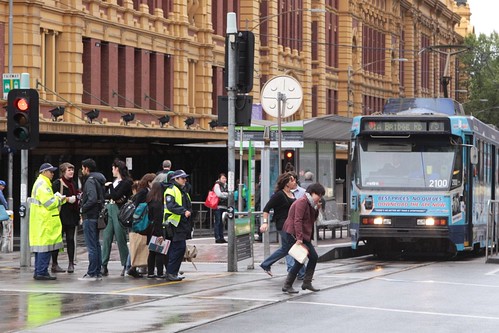 Last week Victoria Police ran another “jaywalking blitz” in the Melbourne CBD, with their media release having the following to say:

Police are disappointed by the number of pedestrians still not getting the message in the Melbourne CBD and choosing to risk their life when they cross the road.

The main offences detected were for crossing the road against the red light and jaywalking to and from various tram stops.

Officers were concerned by the number of pedestrians who crossed the road without looking while talking or texting on mobile phones or listening to personal music players.

“We don’t want pedestrians to be injured or killed while doing something as simple as crossing the road.”

Further operations are planned in the near future.

The police do have a point about distration – if you are stupid enough to walk out into traffic without looking you deserve to be fined – but if there are no cars around, I should be allowed to walk wherever I like.

ALSO IN THIS PACKAGE

Dubai: UAE residents have been warned that crossing the street at the wrong place at the wrong time could cost them big time.

The Dubai Police issued a warning on Tuesday, reminding pedestrians not to cross the roads from undesignated places, citing that it not only endangers their life, it can also cost them a lot of money.

Over 50,000 people are caught jaywalking in a year

Crossing a roadway outside pedestrian lanes is illegal and anyone caught doing so is liable to pay a fine of Dh400. The same amount of fine also applies to pedestrians who ignore traffic lights.

“Crossing roads from undesignated places endangers your life and results in a fine of Dh400,” the police said on Twitter, in an apparent bid to curb accidents involving pedestrians and vehicles.

Crossing roads from undesignated places endangers your life and results in a fine of 400 AED.#DubaiPolice#YourSecurityOurHappiness#SmartSecureTogether

Jaywalking is a common offence in the UAE and in 2017 alone, at least 50,000 violators were fined by Abu Dhabi Police.

The number of people who got killed while walking or crossing the street went up by 21 per cent last year compared to 2016.

At least 63 individual lost their lives after being struck by vehicles in 2017, compared to 50 a year earlier.