Tehran is very much like any developed capital in the world.

In Urban Development, its mayor and municipal team have received several “Best Mayor” awards. The city is highly developed, with a very high highway/street ratio to the population, a lot of greenery and scenery etc.

Tehran is a mountain city, surrounded by mountains, and thus is one of the high pollution cities in the world.

A majority of Tehranians do not live in great conditions, as with most large cities or capitals. Wages are barely above average, but costs are way higher than average.

However, living costs in Tehran (housing aside) is one of the cheapest in large world capitals. As for the housing, many live in the neighboring Karaj city which is cheaper with housing, and commute to Tehran via the subway or other means.

Tehran has a very large rich population. Iran is a rapidly developing country, and because most of its income is from natural resources, there are a lot of people who have tremendous unaccounted incomes.

I have lived in Tehran and a bunch of other large cities, including NYC. Comparing them, I can say with confidence that the average Tehranian lives much better than the average NYC resident.

As for the wealthy Tehrani lifestyle (called Northern Tehran) which I have spent a few years at, it would be comparable to the rich Los Angeles living experience.

I have attached a few photos from Tehran, typically from street life, and sometimes from inside peoples’ houses to give a better reflection of the general lifestyle: 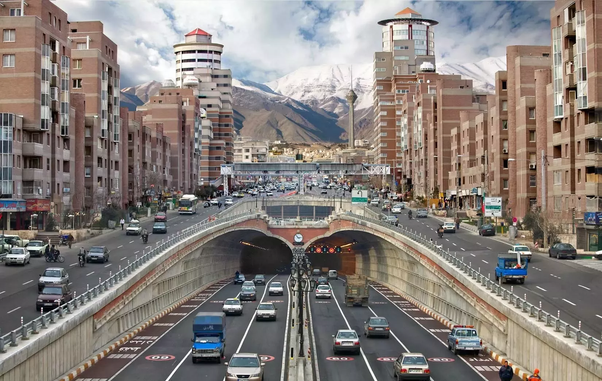 A teenager walking the sidewalk. A view of the poorest South Tehran streets. Under South Tehran slums (note: most Tehrani citizens are not exposed to such views in their lifetime) A view of my apartment in Tehran. These buildings are built at a height of 1800m from sea levels. A typical gym in Tehran