Barcelona could save hundreds of lives and cut air pollution by a quarter if it fully implements its radical superblocks scheme to reduce traffic, a new report claims.

A study carried out by the Barcelona Institute for Global Health calculates that the city could prevent 667 premature deaths every year if it created all 503 superblocks envisaged in its initial plan – up from the current six schemes.

The superblocks are groups of streets where traffic is reduced to close to zero, with the space formerly occupied by cars given over to pedestrians and play areas.

The concept is the brainchild of BCNecologia, an agency led by Salvador Rueda. The six schemes introduced so far have been generally welcomed by residents of a city whose air quality regularly exceeds the World Health Organization’s legal limits for pollutants such as nitrogen dioxide (NO2).

The life expectancy of the average Barcelona resident could increase by almost 200 days, the report adds, saving the city €1.7bn (£1.52bn) a year. The most notable health benefits would come from reductions in air pollution (preventing 291 premature deaths a year), followed by reduced traffic noise and heat island effects (preventing 163 and 117 premature deaths respectively).

The study also estimates that the total of 1.19m journeys in private vehicles would fall by 230,000 a week as people switched to public transport or making journeys on foot or by bicycle.

The plan would also increase the number of green spaces in what is a densely populated city with few public parks. In the Eixample district alone, researchers calculate that the increase in vegetation resulting from the plan would prevent 60 premature deaths a year.

“It is important to remember that the data we present are estimates and that the methodology used has certain limitations,” said Natalie Mueller, lead author of the study. “This means that our findings must be interpreted with caution. Nevertheless, irrespective of the specific figures, what this study shows is that urban planning and transport interventions like the superblocks have significant implications for public health.” 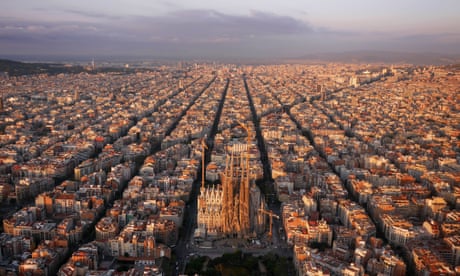 “We urgently need a paradigm shift away from the car-centred urban planning model and towards a people-centred approach,” she said.

When the first superblock was introduced in 2017 in Poblenou, in the north of the city, it was met with opposition by car owners and also those who claimed it would be ruinous to local business.

However, opposition has faded as residents have begun to enjoy the benefits of a traffic-free neighbourhood. There are also 30% more local businesses than previously and the area has seen a significant increase in the numbers of people making journeys on foot or cycling.

The superblocks model has attracted attention from other cities, and in Seattle in the US there is a proposal to introduce something akin to the Barcelona scheme in a six-block area in the Capitol Hill neighbourhood.

The north-west US city has already experimented with something similar with its Home Zones project, in which residents are offered grants to introduce traffic-calming schemes.