Cox’s Basar was a famous tourist destination, which is tuned by Rouhinga refugees.. Therefore; Bangladeshis feel discomfort and anger for such economic crisis.

Bangladeshi Navy had spent more than $ 280 mln to built the city on the reclaimed slit island. Planned to host more than 100,000 of the refugees.

Government had sought assistance from accredited engineers and architects; who confirm the locations is reinforced and buildings are stable. It looks okay from photos show higher location of 20 meters above seal level.

Yet, social and international media cry for abuse of human rights that the island is temporarily afloat, and subject to drown by cyclones. So far no Geologist or Scientist express an opinion on an increasing hot issue

Government plans to relocate the refugees by force if necessary; while Myanmar government express no attention or opportunity to discuss the repatriate of its people, despite the controversial IDs and Citizenship case..!!

Not a geologist but my pennies worth is as follow.

If they do it right yes it would work. To make sure that all goes well I would try to get Dutch engineers involved. Looking at the map it loos like a good candidate for polderisation. Bangladesh already has lots of experience in polderisation but I would bring in some Dutch engineers for extra vigilance and second opinions in the design and management.

The island also looks like a good candidate for phase I of further reclamation between Sandwip and the mainland. Looking at Google maps it looks like nature is already starting the process. Maybe the best strategy is to let nature take it’s course but hurry it along a bit.

But that’s me looking at the map and thinking out aloud. And sucking this out of my thumb. But stuff like this has been done quite a lot before in Bangladesh. It is the second most polderised country in the world after The Netherlands. 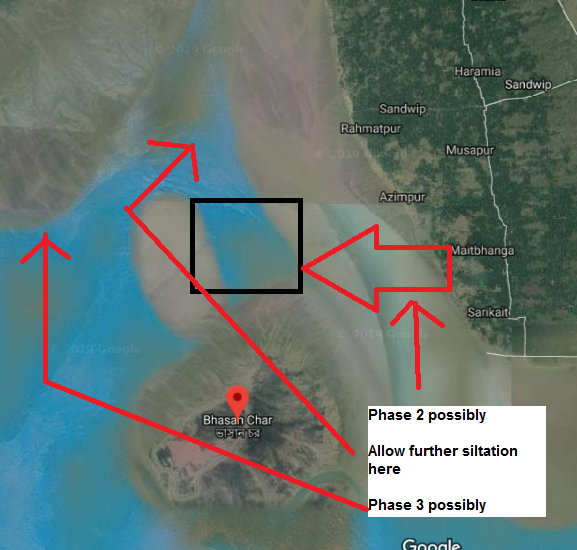