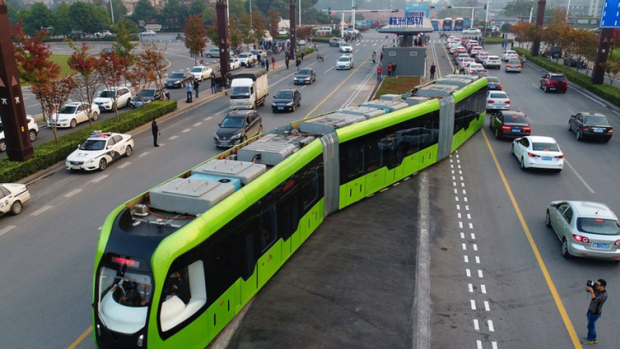 “Over the next five years we will see significant advancements in innovations around trackless trams,” Mr Constance told The Australian Financial Review.
“The beauty of it is that it separates out the mode of transport from the road network and you have standalone stops, and it’s fully electric.”

Trackless trams are a hybrid between buses and trams. They are powered by electric batteries and have rubber wheels, using sensors to guide their way along roads so they don’t need overhead wires or steel rail tracks to operate – which also means they are cheaper.

In China, where the new trams are being developed by the CRRC Zhuzhou Institute Co, they are known as “autonomous rail rapid transit.”

Sydney’s Liverpool City Council is investigating trackless trams to connect Liverpool city centre with the new Western Sydney Airport about 19 kilometres away. The council is researching the trams in partnership with Western Australia’s Curtin University.

Curtin University professor of sustainability Peter Newman has described light rail as “gold-standard technology” for fast public transport with zero carbon emissions, but says trackless trams can replicate the light rail experience for a fraction of the cost.
While Sydney is pushing ahead with the first stage of another new light rail line in Parramatta, Mr Constance said the government would consider using trackless trams instead of light rail trams for the second stage. Asked whether the future of light rail in Sydney was trackless, Mr Constance said “that is very, very possible”. 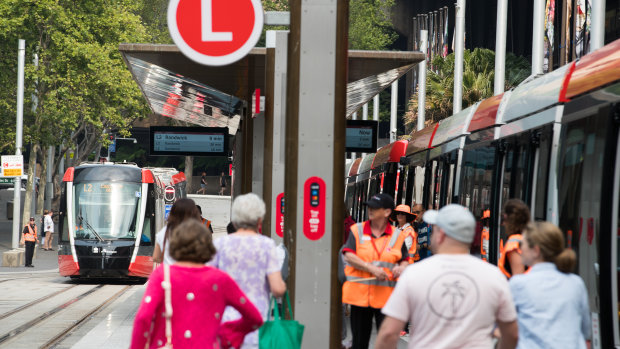 Sydney’s new $2.9 billion light rail line was expensive to build due to the cost of laying rail tracks and moving utilities. Edwina Pickles

The NSW government also hopes to eventually expand the automated Sydney metro – which opened in March and will extend into the CBD and south-western suburbs – to south-eastern suburbs, he said.

The minister claimed the opening of the $2.9 billion new CBD light rail line, which runs down George Street, had gone “incredibly well,” with some 160,000 people using it for free over the weekend, and another 15,000 paying passengers using it between 5am and 2pm on Monday.

Commuters have complained on social media that the new rail line is slow, with some trams taking almost an hour to get from the eastern suburbs into the city.

The minister said travel times for the full route were around 45-48 minutes on Monday morning, below the 50-minute journey time forecast for the first few months and would continue to improve as people got used to the new trams. Drivers have to watch out for cyclists, skateboarders and people taking selfies on the tram tracks.

The NSW government said there was an 18 per cent drop in trips on buses to the south-east of Sydney on Monday compared with a week earlier but it was unclear whether this was due to people switching to light rail or people going on holidays.

The busiest stops on Monday were near Sydney’s Central Station, Queen Victoria Building and Circular Quay.