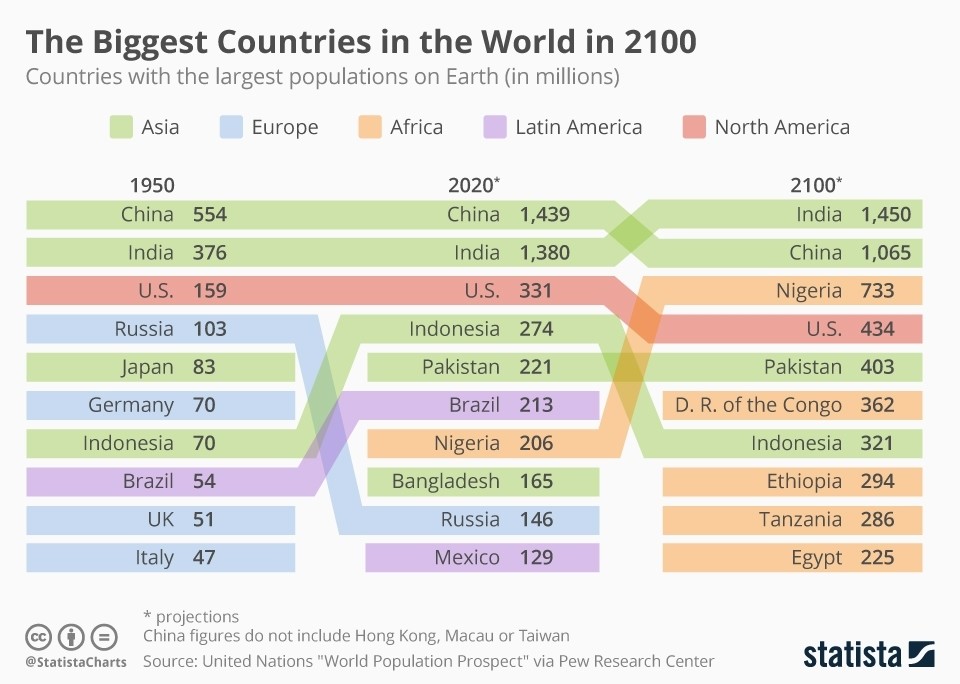 Despite demographics are not that critical competence for spearheading, yet it has a momentum weight in decision making..
Do you think that Africa would role by 2150..?
Releasing its energy and enthusiasm..?
Shall it be a good thing..?
I personally, don’t think so…!!
Despite the atrocities that took place, the today’s fact that there are tremendous challenges that almost hard to defuse.. Topped by an Intellectual Gap..
Adil

In 2100, half of the biggest countries in the world will be in Africa

In the 21st century so far, populous countries and strong population growth were most often associated with Asia – but this view of the world will have to change in the future, data by the United Nations and Pew Research Center shows.

While in 2020, five out of the ten most populous countries in the world were located in Asia, the picture will look different in 2100, when five African countries – Nigeria, Ethiopia, Tanzania, Egypt and the Democratic Republic of the Congo – will be among the world’s ten largest. While some Asian countries will continue to grow, they will do so at a lower rate and will be surpassed in population by African countries exhibiting faster growth. Others, like China and Bangladesh are actually expected to shrink until 2100, mainly a result of higher standard of living and education that has already begun to lower birth rates.

In 1950, four European countries were still among the world’s largest. That number will have decreased to one in 2020 and none in 2100.

Christian Roman Gutzwiller
Trans Africa Railway Corporation Programme Manager (#TARC) at GHABA – GHANA AUSTRIA BUSINESS ASSOCIATION
Africa just need to cancel the „Pact of Conolianization“ and it’s associated contracts, which where signed when each country got independent. Please make your research by each country in the AU and take decisive steps to cancel those contracts for the „financial liberation of Africa“ from the EU.
Winner will be: Africa and AfCFTA.
Who in Africa/EU takes responsibility for that? European Commission, Alan John Kyerematen
The greatest corruption in Africa comes from outside Africa. A strong Africa, is an Africa which is not exploited from Multinationals with close ties to the Pact of Colonialization. How ist this ok?