Lots of talk about the GERD that Ethiopia builds, and generates protest from Egypt. Diplomatic negotiations, with honorary participation of Sudan and USA, reaches no where. Sever conflict of interests between the two countries.

To put it in the right context; this is the correct comparison.. It is not a photoshopped, but Egyptian has 95% concentration along the Nile , while in Ethiopia and Sudan it is the other way around..In addition, the 2016 power generation of each country reflects the stat of development, and night-light consumption..

Population density at the core comparison..
Specially the heaviest at urban regions
nothing else to compare..!!

Therefore, it is widely justified for Ethiopia to take all necessary planning, projects and developments to upgrade the economy and welfare of its people.

This what justifies the concentration of urbanism and higher energy consumption.. and problematic urban growth.. I do not speak for political will, which is ruled by unethical roles in most of the times, but speaking the scientific and urban realities.. Then, politicians may tailor the way they want; in order to score more votes..  Our dilemma as 3rd world, that science and logic don’t role.. Poverty is not a problem, unless put is a certain context.. China, India, and USSR were not ashamed of Poverty, which turns to be their power engine for economic growth..

Egypt had done all the possible to control the flow of Nile, while generating about 100 MW from its High Dam. However, this is not sufficient for its development and consumption. However, The Egyptian claim on implications of GERD reservoir (74 bln m3) looks incomparable to its own Nasser reservoir  (594 bln m3).. it is almost 8 folds

Both IGAD and COMESA had failed to mediate and bring sense of logic to the hot confrontations. The economic cooperation is the sole refuge from any hostilities, yet we have to learn to share and cooperate rather than provocations or threats. However, the international communities manage the crisis, which is not in favor of either country.

The principle problem of IGAD is their failure to remove the obstacles, which mostly are political and illogical ones, to pave towards serious joint East African developments. Therefore, confrontations and conflicts of interests and bilateral fear grow among the 6 nations. Yet; Egypt is part of the wider COMESA which makes trade a foundation for bilateral cooperation. Both failed the core intent. It will take longer time to do something useful, or replace this handicap treaties. It is not easy to learn sharing.. yet easier for politician to threaten. 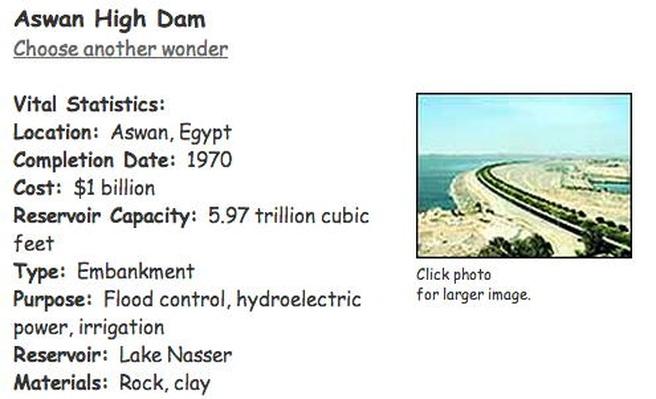