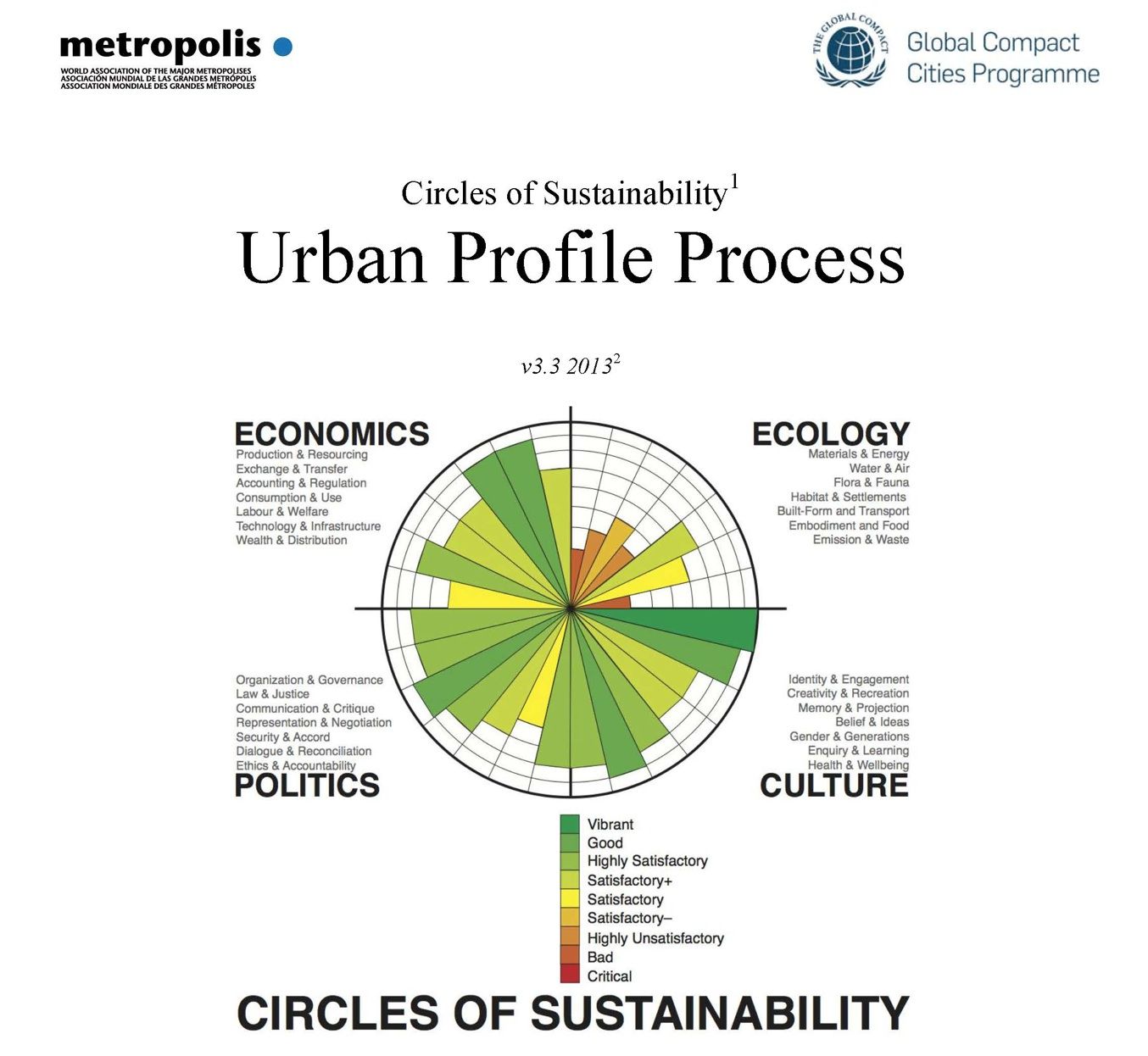 An Overview of the Impact of the Method

Circles of Sustainability is a method first developed through collaboration between Metropolis, the UN Global Compact Cities Programme, and other organisations. It is part of the larger Circles of Social Life project led by Paul James and Liam Magee. The method is used for assessing sustainability and for managing projects directed as socially sustainable outcomes in many places around the world. It is intended to handle seemingly intractable problems. In the context of the contemporary pressures of global climate change, globalisation, urbanisation, and intensifying social change, sustainability assessment projects are increasingly being called upon to play an important role in building a better world. However, the more complex the problems, the less it seems most assessment methods are useful. Circles of Sustainability provides a way of responding to that limitation.

The Initiative began with development an integrated set of tools for assessing and monitoring issues of sustainability while providing guidance for project development. The method was then further refined through projects in Melbourne, Porto Alegre and Milwaukee, and through an ARC-funded cross-disciplinary project that partnered with various organisations including Microsoft Australia, Fuji Xerox Australia, and the City of Melbourne.

It has been implemented successfully by governments and NGOs around the world. The method has been used by a series of global organisations including the UN Global Compact Cities Programme, Metropolis, FIABCI, World Vision and Save the Children to support their engagement in cities. It is also used by a number of cities across the world in different ways to manage major projects (Johannesburg, Milwaukee, and Porto Alegre), to provide assessment analyses of their sustainability profiles (Hyderabad, New Delhi, Sao Paulo, and Tehran), or to develop or consider climate change adaptation plans (Barcelona, Berlin, Lyon, and Liverpool). 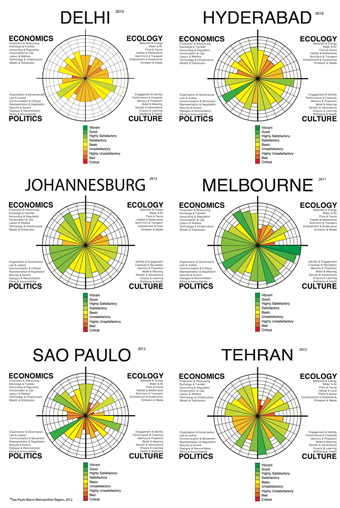 Examples of the Impact of the Circles of Sustainability Methodology

The methodology was employed by UN Global Compact Cities Programme for its engagement with its 90 Signatory Cities (2008–2014). In particular, the 14 Innovation Cities in the Programme used the method to manage major projects in their cities, some with intensity and others as a background feature.1

The Chocolatão project refers to the recent resettlement of all the residents of the inner-city Chocolatão slum in Porto Alegre, Brazil. However, it is much more than that. At the inception of the project, the City of Porto Alegre and this research team worked collaboratively towards identifying synergies between the objectives of the municipality’s Local Solidarity Governance Scheme and the Cities Programme. In line with a pilot version of the present method, City Hall assembled a Critical Reference Group to identify critical issues and joint solutions to those issues involved in the resettlement. This collaborative project has been successful in rehousing a whole community of slum dwellers, but more than that is has effected a restructuring of how the city deals with slums. The method ensured sustainability was built into the relocation through changes such as the garbage-collection process of the city (linking the sub domains of ’emission and waste’ and ‘organisation and governance’), and the setting up of recycling depots next to existing slums.

In 2009, the City of Milwaukee in Wisconsin, United States of America, wanted to address the issue of water quality in the city. The Circles of Sustainability methodology became the basis for an integrated city project. In the period of the application of the method (2009–present) there has been a rediscovery of the value of water from an industry and broader community perspective.2 In 2011, Milwaukee won the United States Water Prize given by the Clean Water America Alliance, as well as a prize from IBM Better Cities program worth $.5million. The Community has also attracted some leading water treatment innovators and is establishing a graduate School of Freshwater Sciences at the University of Wisconsin-Milwaukee.3

The Circles of Sustainability method was first used by Metropolis for one of its major commissions, Managing Urban Growth. This Commission, 2009–2011, was asked to make recommendations for use by Metropolis’s 120 member cities on the theme of managing growth. The Commission report using the Circles methodology was published on the web in three languages, and is now used by member cities as a guide to practice.4 In 2012, the research team were invited by Metropolis to further work on one of their major initiatives, the ‘Integrated Strategic Planning and Public-Private Partnerships Initiative’. The methodology was central to the approach used by the Initiative organised by Metropolis, for Indian, Brazilian and Iranian cities. Workshops were held in New Delhi in 2012 and 2013, and senior planners from New Delhi, Hyderabad and Kolkata used the two of the assessment tools in the Circles of Sustainability toolbox to map the sustainability of their cities as part of developing their urban-regional plans. Other cities to use the same tools have been Tehran (in relation to their mega-projects plan) and Sao Paulo (in relation to their macro-metropolitan plan).5

The Commissioner commissioned a study by the developers of Circles of Sustainability to compare the methodology used by the State of the Environment, Victoria. Subsequently the Commissioner released a report in keeping with our recommendations.6 An article on Circles of Sustainability (Scerri and James, 2010) is cited in the document and the Report notes in particular the importance of cultural considerations for their new reporting methodology.

As urban growth became a major theme in the press the ‘Circles’ work became increasingly featured in the press. In 2010, The Economist invited Prof. Paul James with Prof. Chetan Vedya, Director, National Institute of Urban Affairs, India, into a debate around the question of urban growth. It led to over 200 letters to the editor in direct response as well as numerous linked citations on other websites.7 Other notable interviews in relation to the Circles method have been with The Guardian,8 Agence France Press,9 and The New York Times and International Herald Tribune,10 as well as other magazines, newspapers, radio and television outlets.

World Vision, in recognising the how much the two processes of urbanisation and globalisation were changing the landscape, decided to shift its orientation towards urban settings. Previously 80 per cent of its projects had been in small rural communities. Across the period 2011 to 2014, the Cities Programme and the Global Cities Institute worked very closely with World Vision. The Circles of Sustainability method underpined that reorientation and pilot studies were conducted in India, South Africa, Lebanon, Indonesia and elsewhere, to refine the methodology for aid delivery in complex urban settings.

The method became central to the arts policy of the Australian Government as part of project conducted with the Community Development Network and their National Local Government Cultural Forum. The project was mentioned in the Executive Summary of Creative Australia: National Cultural Policy (2013).11 The Australia Council approved funding for $420,000 through the Cultural Development Network for a three-year project called ‘Arts Central’ conducted in the low socio-economic status region of the Central Goldfields to assess the impact of an arts-based partnership on culture vitality in the region. The Circles of Sustainability method was the basis of that project run by the Cultural Development Network.

The UN Economic Commission for Europe used the Circles of Sustainability approach as the basis for its Geneva UN Charter on Sustainable Housing UNECE, Geneva 2015. The Charter was endorsed at the 66th session of the Commission in April 2015.

UCLG commissioned the Circles project team to write a report on cultural assessment. It was published as Agenda 21 for Culture: Assessing Cultural Sustainability, UCLG, Barcelona, 2014, and translated into French and Spanish. This report became a grounding document for the development of the Agenda 21 process. In 2015, the Committee on Culture of UCLG launched the program ‘Culture in Sustainable Cities: Learning with Culture 21 Actions’. The assessment model of the Circles project was built into program.

The Food Alliance, Australia, and Sustain began uses the Circles method in 2014 as the basis of its food assessment process for municipalities in Victoria. So far three municipalities—Whittlesea, Yarra Ranges and Ararat—have used the method as the basis for a developing a sustainable food policy and for community engagement. The method is the basis of the method used by the organisation.

In 2015 the Ross Institute, New York, United States, began to use the Circles method as part of their core curriculum for their pedagogy for their students. They developed a data-visualisation process for the method. Ross Institute founder Courtney Ross presented the Circles curriculum tool to the Vatican’s Children and Sustainability Development Forum in November 2015. The project was launched with two contemporary assessments (one by students in the United States and another by a school in New Zealand). Following completion of the prototype they are planning for a more robust second version that will allow students worldwide to register and create assessments/actions.

and PSFK(opens in a new window). In 2011 there was an additional reference to our work through Bruno Berthon, ‘Smart Cities: Can they Work’, Guardian, 1 June 2011. And 2013 there was an interview on growth: Oliver Balch, ‘Forget Economic Growth, We Need Real Prosperity Instead’ (opens in new window)

, The Guardian, 9 May 2013.
9 Agence France Press interview about China, featured on a number of websites and newspapers including: Business Times, 23 January 2012; Oman Tribune (opens in new window)