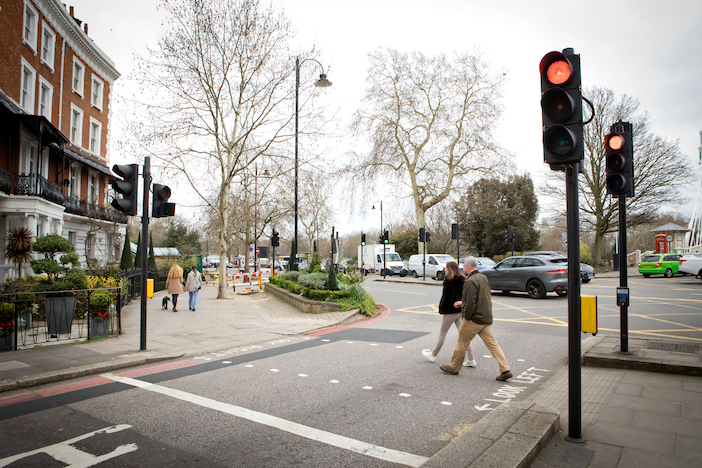 Transport for London (TfL) has announced it is to introduce pedestrian priority technology at more crossings in the city as part of a drive to become the world’s most walkable city.

A total of 18 new pedestrian crossings are to have pioneering Green Person Authority technology, which means they are programmed to show a continuous ‘green person’ (walk) signal until traffic approaches, making it easier for people to cross the road. These will be in place by the end of June and will help make the capital’s transport network even more sustainable and support a green recovery from the coronavirus pandemic.

The number of journeys made on foot has hugely increased throughout the pandemic, with TfL data from earlier this year showing that 31% of Londoners say they are walking to places where they used to travel by a different mode, and 57% say they now go on more walks for exercise or walk for longer than they did before. At one point last year, the number of journeys made on foot increased from 35% of journeys to almost 50%. The new traffic signals will further enable people to travel around the capital this way.

A number of factors have influenced the signal locations, including high pedestrian flow, proximity to pedestrian destinations such as shopping centres, stations and schools, and suitability of existing technology. TfL continues to identify new locations where Green Person Authority crossings can be introduced, with the aim of increasing their number over the coming years.

TfL has also recently extended its Lane Rental scheme to charge for roadworks on 20 of the capital’s footways. TfL has introduced a charge of £350 per day for works that impact on the busiest areas of pavement in the capital, to minimise disruption to people walking. People walking, particularly those with accessibility needs, can be badly impacted by pavements being dug up, especially at the busiest times. 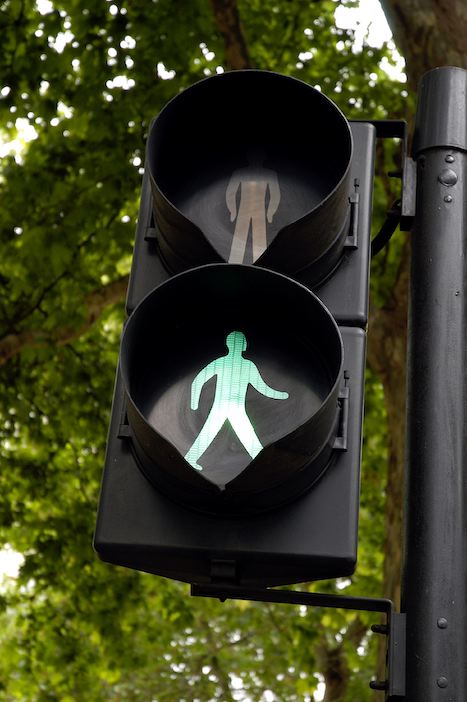 Pedestrian green light on a traffic light in London

The Lane Rental scheme allows TfL to charge utility companies and infrastructure providers a daily fee for digging up the busiest sections of London’s roads at the busiest times. This encourages companies to plan their works outside of the most sensitive times. All money raised from the scheme is then reinvested in initiatives and innovations designed to reduce the congestion and disruption caused by roadworks across the capital.

From March 2020 onwards, TfL worked closely with boroughs across London to deliver around 22,500 sqm of extra pavement space across the capital. The pavements were widened, either using barriers or temporary pavement buildouts, to give people more space to walk and socially distance as part of TfL’s emergency response to the coronavirus pandemic. Greater space on footways make it easier for walking, especially for disabled people. TfL research shows that on average people who regularly walk to the high street spend up to 40% more than people who drive.

Will Norman, London’s walking and cycling commissioner, says: “Walking has so many benefits – it doesn’t just enable us to get from A to B, but also improves our mental and physical health. We know that safety is a key concern for people walking around London, and giving pedestrians priority is a powerful way of putting them first and making it easier to cross London’s roads. By combining this with creating extra pavement space and ensuring roadworks are carried out in a way that doesn’t disrupt Londoners, we will make our city the world’s most walkable and eradicate collisions on our streets.”

Nick Owen, TfL’s Head of Network Performance, said: “We know that walking is a brilliant way for people to make local journeys, boosting activity levels while cutting the number of car trips and the associated congestion and pollution they can cause. We’re determined to make it easier for people to cross the road and to give people the space they need to walk safely, and these initiatives will make a difference in enabling more people to access local high streets, shops and other businesses in a sustainable way.”SHARE THIS STORY:LinkedInTwitterFacebookEmail

Tom has edited Traffic Technology International magazine and the Traffic Technology Today website since May 2014. During his time at the title he has interviewed some of the top transportation chiefs in charge of public agencies around the world as well as chairmen and CEOs of multinational transportation technology corporations. Tom’s early career saw him working on some the UK’s leading consumer magazine titles. He has a law degree from the London School of Economics (LSE).