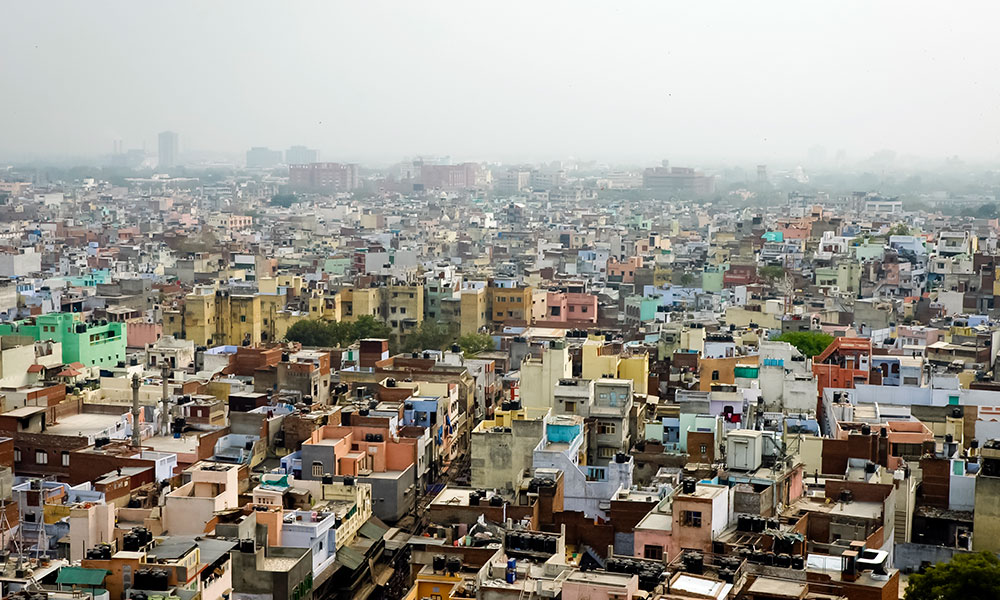 Urban (area)
The definition of ‘urban’ varies from country to country, and, with periodic reclassification, can also vary within one country  over time, making direct comparisons difficult. An urban area can be defined by one or more of the following: administrative
criteria or political boundaries (e.g., area within the jurisdiction of a municipality or town committee), a threshold population size (where the minimum for an urban settlement is typically in the region of 2,000 people, although this varies globally between 200 and 50,000), population density, economic function (e.g., where a significant majority of the population is not primarily engaged in agriculture, or where there is surplus employment) or the presence of urban characteristics (e.g., paved streets, electric lighting, sewerage). In 2010, 3.5 billion people lived in areas classified as urban.

Urbanization
The proportion of a country that is urban.

City proper
The population living within the administrative boundaries of a city, e.g., Washington, D.C. Because city boundaries do not regularly adapt to accommodate population increases, the concepts of urban agglomeration and metropolitan area are often used to
improve the comparability of measurements of city populations across countries and over time.

Urban agglomeration
The population of a built-up or densely populated area containing the city proper, suburbs and continuously settled commuter areas or adjoining territory inhabited at
urban levels of residential density. Large urban agglomerations often include several administratively distinct but functionally linked cities. For example, the urban agglomeration of Tokyo includes the cities of Chiba, Kawasaki, Yokohama and others.

Metropolitan area/region
A formal local government area comprising the urban area as a whole and its primary commuter areas, typically formed around a city with a large concentration of people
(i.e., a population of at least 100,000). In addition to the city proper, a metropolitan area includes both the surrounding territory with urban levels of residential density and some additional lower-density areas that are adjacent to and linked to the city (e.g., through frequent transport, road linkages or commuting facilities). Examples of
metropolitan areas include Greater London and Metro Manila.

Urban sprawl
Also ‘horizontal spreading’ or ‘dispersed urbanization’. The uncontrolled and disproportionate expansion of an urban area into the surrounding countryside, forming low-density, poorly planned patterns of development. Common in both high-income and low-income countries, urban sprawl is characterized by a scattered population living in separate residential areas, with long blocks and poor access, often overdependent on motorized transport and missing welldefined hubs of commercial activity.

Peri-urban area
An area between consolidated urban and rural regions.

Metacity
A major conurbation – a megacity of more than 20 million people. As cities grow and merge, new urban configurations are formed. These include megaregions, urban corridors and city-regions.

Megaregion
A rapidly growing urban cluster surrounded by lowdensity hinterland, formed as a result of expansion, growth and geographical convergence of more than one
metropolitan area and other agglomerations. Common in North America and Europe, megaregions are now expanding in other parts of the world and are characterized
by rapidly growing cities, great concentrations of people (including skilled workers), large markets and significant economic innovation and potential. Examples include the Hong Kong-Shenzhen-Guangzhou megaregion (120 million people) in China and the Tokyo- Nagoya-Osaka-Kyoto-Kobe megaregion (predicted to reach 60 million by 2015) in Japan.

City-region
An urban development on a massive scale: a major city that expands beyond administrative boundaries to engulf smal  cities, towns and semi-urban and rural hinterlands, sometimes expanding sufficiently to merge with other cities, forming large conurbations that eventually become city-regions. For example, the Cape Town city-region in South Africa extends up to 100 kilometres, including the distances that commuters travel every day. The extended Bangkok region in Thailand is expected to expand another 200 kilometres from its centre by 2020, growing far beyond its current population of over 17 million.